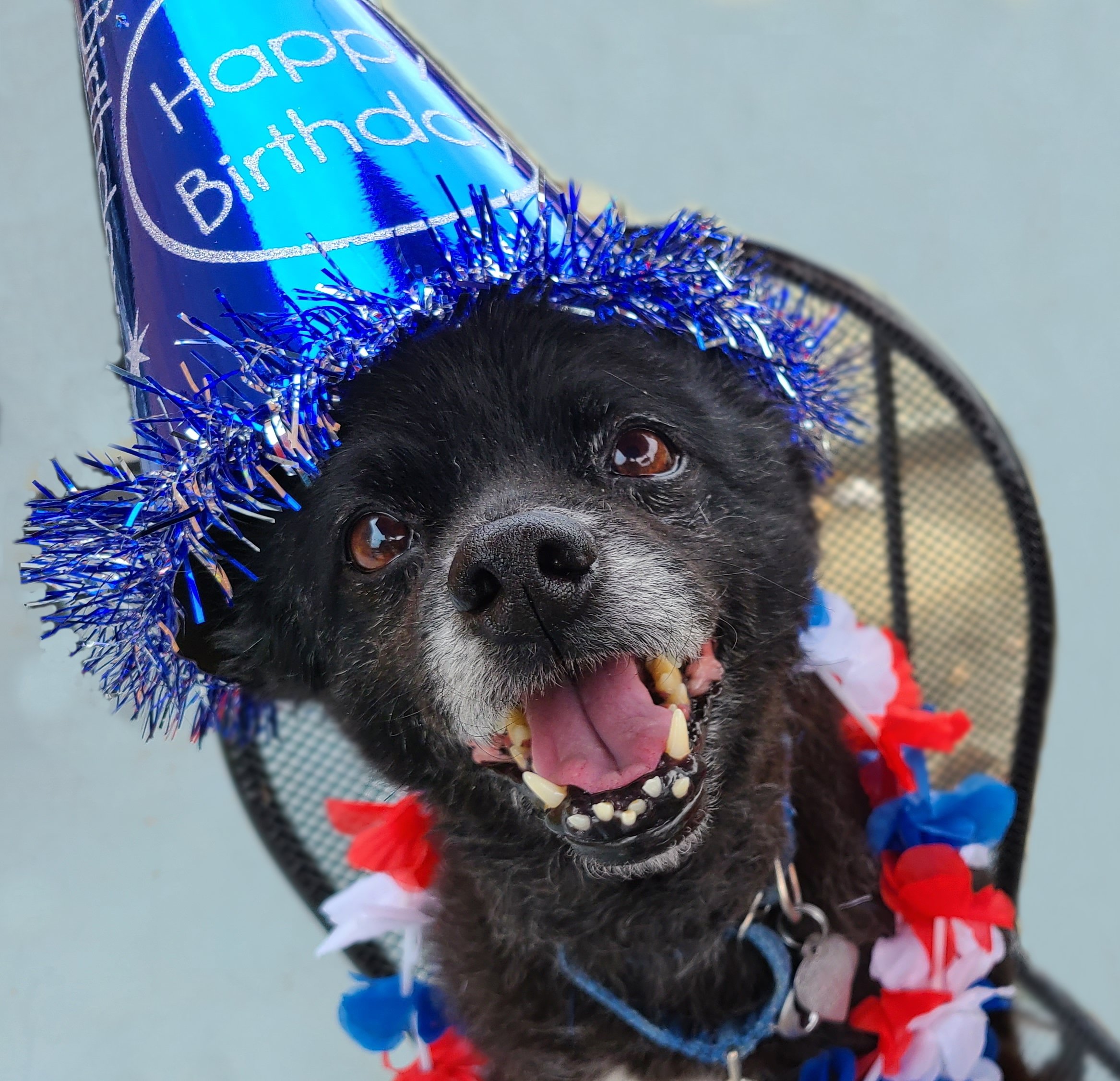 Clifford was turned into a rural county shelter when he was 8 months old. The rescue didn’t realize until he was back at their sanctuary that he could not use his back legs. He had severe luxating patellas that he had probably had his entire life. His legs were bent because that was the position that hurt the least. Clifford got around fine though – he would drag his back legs behind him or walk on his front 2 legs. I brought Clifford home to foster him and see if the orthopedic vet, Dr. Gallagher, could do anything to help him. We weren’t sure if Clifford would even use his back legs if the surgery was done since he had never used those legs before. Dr. Gallagher did surgery on both legs at the same time. Clifford literally hit the ground running after his surgery! He was so excited to be able to use his legs. Foster mom got tearful seeing him raise his leg to pee and digging in the dirt for the first time. Eventually after a year, Clifford deemed his foster home his forever home.

I took Clifford through the basic training classes, Canine Good Citizen, and then decided to try  some Agility classes with him.  The first class was an introduction and Clifford did well following my direction. We went on to the next class with the official sized Agility Equipment. The first time Clifford did every obstacle as he was supposed to…. except the weave poles. He wasn’t even scared of the Teeter! It was like he had been doing Agility for years! Clifford is so unique looking that we did DNA testing that showed he was 3/8 German Shepherd, then a mix of a lot of other breeds. Clifford has a GSD personality, being protective of his family. He will bark and look ferocious but then he will come up to be petted and love everyone. He is known as “The German Shepherd Dog Sheriff”!

Clifford has a big heart and he loves everyone. I was fostering a pregnant puppy mill cocker spaniel. Many puppy mill dogs do not know how to use stairs because they have only been locked up in a cage. After being outside, it was time to come up the deck stairs and into the house. Clifford got halfway up the steps and the pregnant cocker spaniel would not come. She didn’t understand stairs. Clifford went back down the stairs to her, nudged her saying “Come on, this is what we do know to go inside”.  She wouldn’t come because she didn’t know how.  Clifford would not come up the stairs without her!

Clifford’s Dad had to be hospitalized with Covid in December 2020. When he got home, we were to watch his oxygen level as it was still borderline for being discharged from the hospital. During the night Clifford came to my side of the bed and whined like he needed to go out. I got up and let him out and back in and thought I would go back to sleep. He came over to me again whining. Then he went to his Dad’s side of the bed and whined more. I thought something may be wrong so I turned the light on and tried to wake him up.  He was very groggy so I just put the oximeter on his finger and his oxygen level was way lower than it should be. Clifford had alerted us! I got him fully awake and up and his oxygen level got back to an acceptable level.

Here is a YouTube video of Clifford’s story: https://youtu.be/W0omgg9bok0